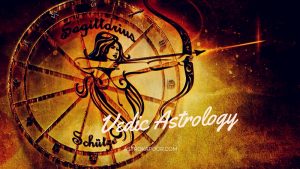 What is Vedic Astrology?
Astrology is the science of planets. This science depicts the effects of planet on human lives.

The term vedic astrology or the hindu astrology, has been used as the English equivalent of Jyotisha since 19th century. Vedic astrology is relatively a recent term, which entered common usage in the 1970s with self-help publications on Ayurveda or Yoga. Some authors have argued that in the mythology, such as Ramayan and Mahabharata, only electional astrology, omens, dreams and physiognomy is used, but, still, there are several articles and blogs published which cites multiple references in those books where rashi(zodiac) is based.

One can see the glimpses of vedic astrology in the ‘Athar-Veda’, one among the most sacred texts of India. Ancient Indian Vedas Astrology in India, is popularly known as Jyotish, and relies more on the Sideral positions of the Planets.

If we analyse the horoscope, we can go through the analysis of birth chart of a person. According to Vedas, there are 27+1 constellations made up of 12 Zodiac sign, 9 planets and 12 houses. With each of these houses, it casts some effects on the human lives as well. Depending on the birth of a person, the 12 signs are distributed among the 12 Houses and 9 Planets are placed in various Houses of Kundalis.

The visual representation of the snapshot of the signs planets is known as Kundali or the Horoscope Chart. Vedic astrology is the interpreting and analyzing the arrangement of planets and their role which applies to the humans and other entities. According to Indian Vedic astrology in India, the celestial either be the Sun and the Moon, the planets or stars influence the Terrestrial phenomena, and also indicate such phenomena by their value or configuration. The configurations of the planets and stars at the moment of our birth determine our basic life and basic life story. It also determines the characteristics, strength, and weakness of a planet.

Suppose, if a person is born in the Gemini ascendant, then the role of Mercury is very important in his life. Mercury rules over the mind and the intellectual capabilities of a person, so the analysis of its position is extremely important for its result. It is also important to analyse the degree and the role of degrees of Mercury. In Vedic Astrology, apart from planets and the celestial bodies, the role of Nakshatra also plays an important role. The timing of birth and the nakshatra operating at a certain moment is very important to get an exact picture of the natives’ birth life cycle.
In short, we can infer that astrology is the limb of Vedas and also referred to as the eyes of Veda because it gives us a picture of our past karma, present karma and the future karma. It helps one to act accordingly as per the prediction of their birth chart or the horoscope.

India Is the Origin of Vedic Astrology

Vedic astrology, which has its origins in the Vedas, India’s oldest body of knowledge, is founded on the notion that the stars and planets exert a strong impact on our lives.

According to the Vedas, a person’s karma is intimately tied to the position of the planets and stars; hence, Vedic astrology is the science of analysing these locations to determine a person’s karma.

Vedic astrology, formerly known as Jyotish, or “the study of light,” is considered by many to be the “eye” of the Vedas, as it is intended to guide people who feel lost or bewildered on their life’s path.

How Vedic Astrology Makes Predictions under a Particular Nakshatra

Using the movement of celestial planets, astrology is an ancient discipline that is used to determine the likelihood of the future. Vedic astrology readings are based on astronomical science

First, our astrologers know the precise locations of your planet relative to the fixed stars at a given time, as well as the zodiacal fixed star signs for any location on Earth in which you are given. Using this information, our astrologers create a chart for a person that allows them to anticipate many elements of their lives. Astrologers create your birth chart based on the time of your birth and the location of the stars in your zodiac to ascertain your Vedic astrology sign compatibility.

In Vedic Astrology, the Karma Chakra Determines Your Fate

Vedic astrology is utilised to comprehend an individual’s karma chakra. According to Vedic astrology, everything is interrelated. Everything or life has an energy that is interconnected and frequently influential.

On the basis of your cosmic blueprint, your karma and fate are determined. According to Hindu astrology, your soul is immortal and incarnates in different bodies on earth at different times.

Your existence is a reflection of your larger self. On the basis of your karma as a soul and the position of the stars and planets at the moment of your birth, Vedic astrology signs represent your life events and fortune.

Our Vedic astrologers can inform you about your past life karma in order to explain a current incident. Your Janampatri serves as a roadmap for understanding how your Graha Dasha will impact each period of your life.

Get your answer from our experienced Vedic Astrologers

The procedure of becoming a Vedic astrologer involves many years of academic study and training. The best astrologers are those who have truly honed their abilities throughout their entire lives. Even so, its practice is so nuanced and complex that mastery is nearly unattainable. Astro Kapoor’s Vedic astrologers have all the relevant experience that makes them professional Vedic astrologers.

Vedic astrology transcends its technical parts and is essentially a spiritual science, necessitating a level of intuition that is typically only available to individuals who adhere to particular norms of spiritual practice. Our astrologers maintain a high level of spiritual discipline in order to interpret horoscopes and offer guidance on how to best confront life’s problems from a spiritual standpoint.

For people who feel particularly lost or are going through a difficult moment, our Vedic astrologers can provide you with the best perspective required to view your life’s problems not as sources of sadness but as opportunities for spiritual growth. Consult your problems with our Vedic astrologers and get your personalised solutions now!