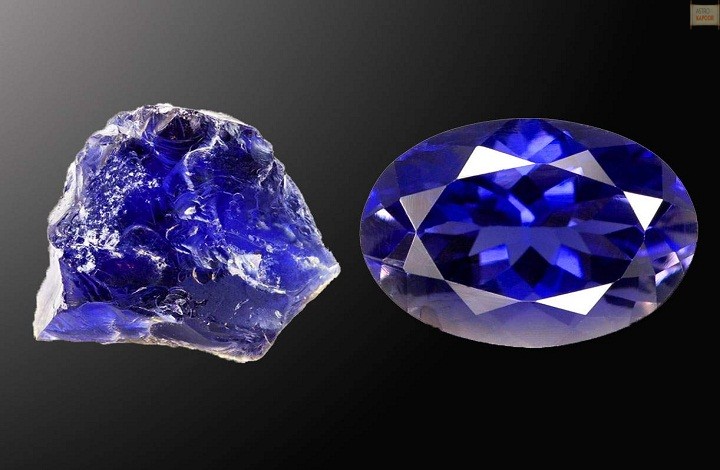 Sapphire is a precious gemstone, and well known as the variety of mineral corundum. It consists of aluminum oxide with small traces of iron, titanium, chromium, vanadium and magnesium. It is typically blue, but natural fancy sapphires are also found in other colours such as yellow, purple, orange and green colours. Pink colored corundum may be either classified as ruby or sapphire depending on locale. Commonly, natural sapphires are cut and polished into gemstones and worn in jewelry. Sometimes it is also created synthetically in laboratories for industrial and decorative purposes. The hardness of the sapphire on Mohs scale is 9.

Sapphires are highly prized gemstones since 800 BC. It was also carved during the Persian age as rulers of this era believed that the sky was painted blue by the reflection of sapphire stones. Blue sapphires were a holy stone to the Catholic Church and to the Ancient Persians, as they believed that they made the sky blue by their reflections. Sapphires are stones of the ancient lore also as they believed that the tablets upon which the Ten Commandments were written, were actually sapphire. This means that either the script was very tiny, or the sapphire was made by the hands of someone other than mother earth.

The Museum of Natural History situated in New York is a home to one of the most excellent sapphires in the world, the “Star of India”, a sapphire of 563 carats. The sapphire has for a long time identified with chastity, piety, and repentance. It brings wisdom and truth and also increases the perception and the understanding of justice. It helps to find peace of mind and also develops serenity. Sapphires are also associated with romantic love, understanding fidelity and romantic devotion.

The sapphire has for centuries been seen as a symbol of love, heavens, guardian of innocence and bestower of truth. It also helps to promote good health, and a preserver of chastity. It is believed that it helps to bring gifts, joy, prosperity and beauty. Some wore it to ward off illness or as a protection while traveling.

During middle ages, people believed that wearing sapphire helps to remove negative thoughts and also helps to cure ailments. In ancient Persia, if ground up, it was used as ll purpose medicine. Ivan the Terrible of Russia has said that sapphire strengthened the heart and muscles and helps to endow the person with courage. Other stated that it was an anecdote for poison as it killed snakes on site and if engraved with the figure of a man or a ram, helps to cure all illness and elevate the owner to a high position.

If you wish to buy sapphire, before buying, make sure to get certificate of authentication from a reputed gem lab because there are many sellers who sells fake sapphire in the name of original one. The prices of the sapphires vary for the quality of the same. The best quality sapphire may fetch price between INR 5000 to INR 10,000 percarat.