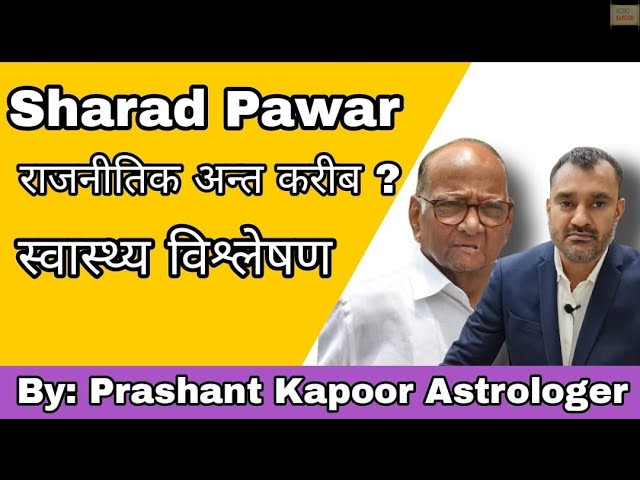 Astrological analysis of Sharad Pawar’s horoscope can give answers to few questions. First would be his political career i.e. When will it end?

The second  would be about his successor. Whether his nephew will continue further or this nepotism will end. The third about his health. Let’s begin with his political career

The horoscope of Sharad Pawar is in front of you and many a time a question has been raised by you: Do the 6th house and the 10th house form Raja yoga

Every Rajyoga formed in this Natal chart of Sharad Pawar is a very good Raja yoga and all are in between 6th to 12th house. Five planets are residing in 6th and 12th house. Because of these planets, we will do the analysis today that how this Rajayoga formed. Why Sharad Pawar is called The “Chanakya” of politics and that is because Shatru-hanta yoga is formed in The 6th house. and he is also known for his wisdom and intellect and even to this date, Many politician, when in trap or problem, they take a lesson from that history of Sharad Pawar Ji that is how he, in 1999, started his political career and founded NCP when both Rahu’s Antar in Guru mahadasha and Dasha children was ruling his horoscope

How he gave birth to maha-aghadi. And if we talk about politics, exceptions are very few. If we look at Chanakya’s history and go in the past, we will find that Ethics does not matter in politics.So, if you look at the 6th house in this horoscope, many people must be believing that Shani has villainously moved to the 6th house.

But, Shani is not a villain in the 6th house because Nich-bhang raj yoga is formed. which has ended the villainy of Shani. This has happened because Shani is in the Mesh Rashi which is its villainous Rashi.

Mangal through its position in the 12th house has formed his own trikona rashi which develops into Mesh over the 6th house of Shani. This combination destroys the villainy of Shani.

“Mangal protecting his own house” makes the person associated an “enemy-slayer”. Besides this, Shani’s Uchnath, which is Shukr, is residing in its Swarashi in the 12th house. There is a Veda formed between Shukr and Shani which also indicates the disruption of the villainy of Shani. Nich-bhanga raja yoga is forming here. Have a look at another combination:

The Lord guru of the 5th house and Lord chandrama of the 9th house are sitting in the 6th house together. Gajkeshri yog is forming. Shani is sitting with them. A Yuti of Shani and Mangal is formed.

In Sharad Pawar’s Kundali, Mangal is lagnesh. So, Lagnesh, Panchmesh, Navnesh and Chaturthesh Shani and along with Shukr who is Saptamesh. So, Kendra and Trikona from 6th to 12th is called a great Rajayoga in which if we study Chandrama separately, Chandrama is in the Mesh Rashi and Mangal who is the lord of Chandrama in the Mesh Rashi is guiding him. So, there is an excellent Rajayoga in the 6th house.

Sharad Pawar’s Kundali is filled with so many points on which analysis can be done. But, we have to analyze some other facts too. In short,when Rahu’s mahadasha started, in 1967, then Rahu made him so popular. He was a very young MLA then and at a very early age, became the Chief Minister of Maharashtra. He became MLA when he was 26 years old During those days, Rahu Antar was on and If you look at Rahu’s status in the Navansh horoscope then you will find that.

Rahu and Shukr are sitting in the 5th house and Chandrama, Saptmesh, making a Yuti with itself. Let’s proceed to other facts and do the analysis of his family. Ajit Pawar who is his nephew and the current Deputy Chief minister of Maharashtra. So, How long will this Nepotism be on? Because When this Maha- Vikash aghadi was formed, then at that time, Ajit Pawar supported BJP also.

People who follow Chanakya, even, today are the exception and they are very few I’m sure that you guys will list out the name of such politician and Rajnitigya who thought of doing leadership who only cared about the welfare of people.

If we talk about Ajit Pawar, We can see that lord Shani of the 3rd house has moved 6th house and prediction about younger brother or sister is done from 3rd house.

The 5th house from the 3rd would be the 7th house and the analysis of the Nephew, Ajit, will be done from the 7th house. Shukr has moved to the 12th house i.e. to Vyesh Sthana which indicates when Shukr antar will come in Budh Mahadasha and which will come in between 16th July 2020 to 16th May 2025. This indicates that this family alliance break during this period and will not continue any longer.

So, who will become Sharad’s Successor? Have a look at the Saptamsha Kundli on the screen. In this kundli, Chandrama is in Lagan Saptamesh kundli is used to analyze progeny and its well-being.

Chandrama is personified as a female. There is a probability his daughter Supriya Pawar might take over the reins. Shani, the lord of progeny, has sight over Chandrama

Chandrama or lagan is also connected with politics. Because, when counted in Panch-mahapurush, Lagan is considered Surya in Kalpurush. And If we look at Mangal, It is commander in the 6th house.

And is gazing at lagan with its 8th sight. Sharad Pawar’s Natal chart indicates that Sharadpavar’s next heir will be his daughter. And whatever equations will be formed, they will be made in the difference of Venus in Mercury.

Health analysis. This horoscope indicates That this Raja Yoga of the house in the sixth and twelfth.

When this kind of horoscope comes then it is said that the property of a person on foreign land is at least 20 times the property he has on his motherland.

And the connection of such people to the property is very big. And it is a hidden property and these are some thumb rules because, Lord of Foreign land, Venus, is in the 12th house.

Panchmesh Moon in the 6th house and Ashtamesh Mercury have gone into the ascendant.

And this hidden asset? And the lord of the public place, Saturn, tells us about public money, connections, and much more.

So, the 12th house also indicates that their asset remains hidden and the asset of such people is revealed much later.

Now we come to his health. Friends as you know that his health is not well these days.

The Mahadasha of Buddha is gone in the Scorpio ascendant in this horoscope, and this arrangement is called functional malefic.

Means Marakesh Planet because it is Ashtamesh and Ekadeshesh, and both of them are called Mark House.

The connection that is formed between Sun and the Buddha and Buddha has moved into the zodiac sign of his enemy, Mars.

And is also with the Sun here. Though It is far away. The degree is far away, but when analyzing in Treshansh horoscope,

Mercury’s position is not auspicious and mercury is under the malefic influence of Mars and Saturn, which indicates that after the Mahadasha of Mercury, troubles with his health will keep on increasing, and as soon as Guru’s transit,i.e.

When guru comes in Kumb Rashi. On the morning of April 6, 2021. There will also be a recovery But after that, this health will deteriorate continuously because the further connection of Saturn will also come.

This is the same Saturn, Mahadasha of which started, around 1999 or 2000 Then this Shani, because he had the habit of consuming drugs, made Raja Yoga.

Now see, Saturn made a huge Raja Yoga in the 6th house, but if this Saturn is a villain then it will show its villainous self in some way or other so it gave him a paralytic attack, Chronic diseases. Distorted his face. If a planet makes a great Raja Yoga, it will show its lowliness somewhere. Now the difference between Shani and Ketu will start after 19th July 2021 and will remain till 16th July 2022. Ketu has gone into the constellation of Saturn. In the Uttarabhadrapada nakshatra. And this Shani will increase these diseases very much because Saturn is sitting in the sixth house And Saturn also has the effect of Malefic Mars and after that, the difference comes from Venus from16 July 2020 to 16 May 2025. And this Venus will of the extreme mark and this is Venus of the Nakshatra of Guru and the Guru will not give auspicious results in transit at that time. and if we also see the position of Venus, then friends, Mercury is also making Markesh here.
Venus, at seventh and twelfth, is also at his mark position.
Besides the above prediction, there are still some differences on which calculations can be done But, Our focus here is on health analysis. After 19th July 2021, The difference of Ketu as Ketu has moved from10th house to the 8th house

Prediction about politics is done from the 10th house. The movement to the 8th house indicates the complication which has started, after 2020, in Maharashtra politics. And Sharad Pawar, a seasoned player of politics, has played a key role in the formation of maha vikash agadhi of three powers in Maharashtra. After 19th July 2021, complications for NCP will keep on increasing.