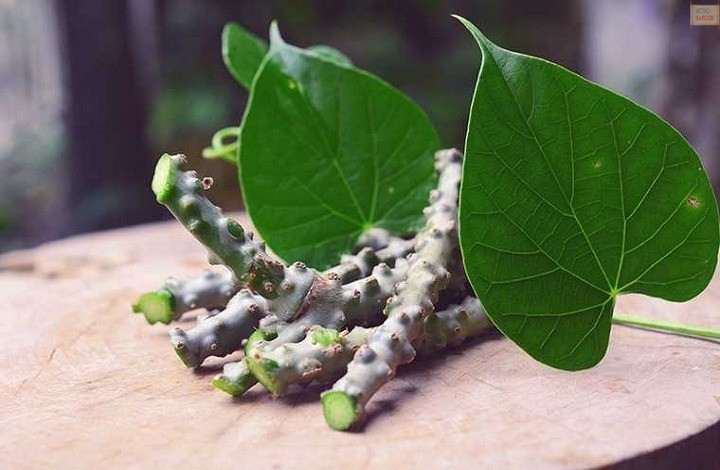 Treatment of Dengue by Giloy

Dengue is a fast emerging prone viral disease in many parts of the world. It is caused due to mosquito-borne viral infection which causes flu like symptoms such as fever, headache, sneezing etc. The complete medication of dengue has not been discovered so far. The completion of incubation period of virus inside the human body causes severe multi-organ failure leading to death. Although, proper remedies are not found for dengue, Ayurveda plays a very important role in the treatment of diseases which are difficult to treat with any other means and medicines. One of the most important herbs for the treatment of Dengue is Giloy.

Giloy is also called as Amrita. It is an anti-inflammatory herb that reduces the inflammation and has an antipyretic effect. It is also called by the name of Guduchi, Madhuparni, Amrita, Vatsadaani, Kundalini and Chakralakshanika. It is abundantly found in North India.

This herb is used in Ayurvedic Rasayanas since centuries. Treatment of dengue by Ayurveda is very helpful in building up the immune system and the body’s defense against infecting organism. The scientific studies conducted using human WBC has shown that the Ayurvedic herb helps to enhance the killing ability of the macrophages ( the resistant cells responsible for fighting with the foreign bodies )

We can find a lot of used of Tinospora Cordifolia or Goloy or Amrita. The stem of the plant is used or the conditions like general weakness, dyspepsia, fevers of unknown origin and swine flu. The bitter properties of giloy show anti-perioic (preventing regular recurrence of the symptoms of disease, as in malaria ) and antispasmodic properties which helps in preventing infectious diseases like swine flu, malaria and dengue. This herb is recommended by the only yoga guru of India Guru Swami Ramdev for preventing swine flu. Juice extracted from Giloy increases the platelet count of blood. Swami Ramdev has successfully treated dengue by using this method.

Giloy helps in maintaining the count of protective WBC and builds up the body’s own protective defense mechanism known as immune system. It is also used as an immunity booster in ailments like jaundice, hepatic fibrosis and other seasonal fevers. Giloy or Amrita has proved that it is very effective in preveting fibrosis and promotes regeneration of the liver. It is also good and helpful as a diuretic agent that helps removing the renal stones and reduces the urea from the blood. Giloy has an antibacterial and anti-inflammatory property. It is also a very good anti-allergic. Giloy is also used for sexually transmitted diseases according to some of the health experts.

To get maximum benefits of Giloy, plenty of clinical studies have been implemented. Its formula has been undergone various contemporary examination of clinical testing to prove its benefits in addressing the health concerns and its quality is controlled by the most advanced chromatographic techniques.

The herb extracted is called as ‘Guduchi Ghana satva’ or Giloy Satva. It is a fine powder and has the great abilities of the herb Guduchi. The positive thing about Guduchi is that even in small doses, it works effectively.

Giloy is a very powerful herb. The best remedy is to take white inner bark of Neem, Rasont and satav Giloy in equal quantity. Mix it with half tea spoon of warm ater. This helps to protect one from all forms of fevers.
Take 1 ft, long Branch of Giloy and seven leaves of Tulsi; boil and drink it as a herbal tea. This tea enhances the body’s resistance level up to three times. It also increases the platelet count and decreases the dengue fever.