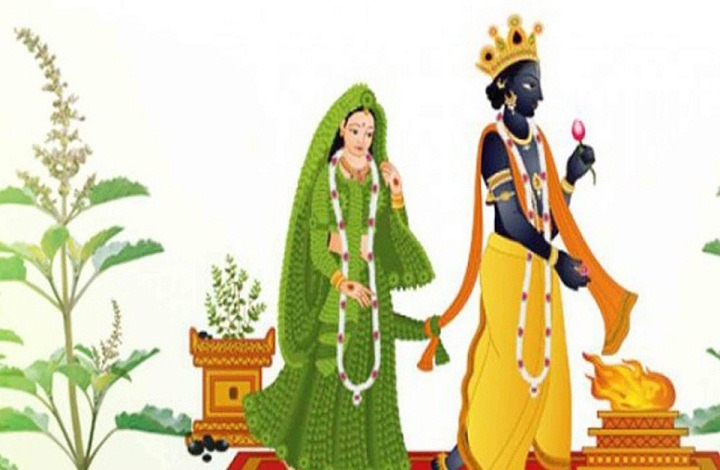 Tulsi Vivah is a divine marriage which is held on the eleventh day of the Shukla Paksha in Kartik month every year. According to Hindu mythology, Tulsi is married to Lord Vishnu with all rituals. The festivity continues for five days and ends on the Purnima on full moon day. Tulsi Vivaah is considered extremely auspicious among Hindus. This day marks the end of the harvesting season and commencement of wedding season.

The divine union of Tulsi and Lord Krishna

As per the rituals, tulsi mata is dressed in a red saree and her branches are covered with red and green bangles, red bindi and kumkum. The mangalsutra is made of dried turmeric root. Along with the Tilis plant, sugarcane, amla and tamarind are also planted. On this day, Maa Lakshmi is revered as Tulsi and Lord Vishnu as Saligram. The marriage ceremony is held in the evening as per the auspicious muhurta and interestingly, the devotee who performs this Vivaah is consider Tulis as a daughter and gives away to Shri Krishna and hence earns the virtues of performing the ritual of Kanyadaan.

As per Hindu scriptures, the tulsi plant in one of her births was a woman named Brinda, married to the Asura king Jalandhar. This was her utmost devotion towards Lord Vishnu that made Jalandhar a tough and indestructible soul. None of the gods was able to defeat the asura king as the prayers of Brinda made him the most powerful warrior. The gods finally pleaded Lord Vishnu and asked for his mercy. Lord Vishnu went to see Brinda in disguise of Jalandhar. When Brinda saw her husband, she was so overjoyed that she ran into his arms but she realized her mistake. The moment was that her chastity was maligned and all powers of Jalandhar were destroyed. Soon Jalandhar was killed by Lord Shiva.

Brinda pleaded Lord Vishnu to reveal His identity. The moment he revealed his identity, she was shocked to see that it was none other than her own Lord who tricked her. She was enraged and she cursed Lord Vishnu that he would turn into black stone. Lord Vishnu accepted the curse of his devotes and turned into black stone, Shaligram. Brinda too ended her life by drowning herself to ocean. Lord Vishnu blessed brinda that a tulsi plant will grow from her ashes and it would be married to Shaligram. This way she will always be united with her Lord and not considered as maligned. He also declared that he will only accept food offered with tulsi leaves. Hence the bhog offered to Lord Vishnu has always Tulsi Leaf placed on it.