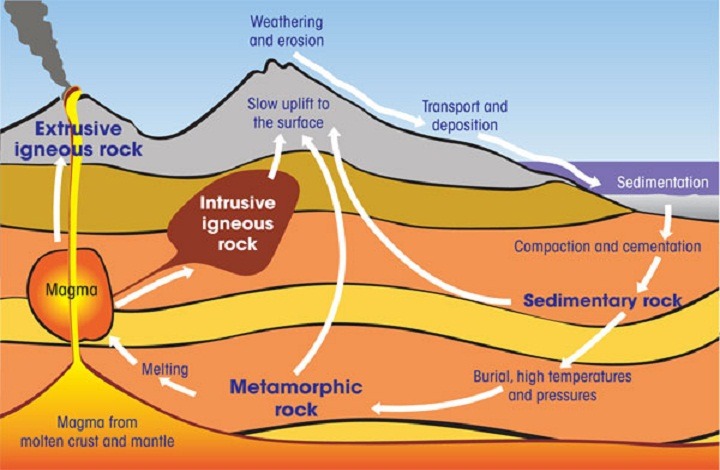 A few gemstones are formed in the mantle, but all gems are mined from the crust. The crust is made of three kinds of rock, i.e. igneous, sedimentary and metamorphic rock. These terms are referred to as the way rock is formed. Some gemstones are associated with only one kind of rock in particular.

The igneous process involves the process of solidification of magma. Magma rises to the crust, usually through volcanic pipes. After reaching to the surface of the earth, it solidifies as lava. However, if the magmatic mass cools slowly in the crust, it is usually can crystallized and form minerals. Increases in pressure can result in the formation pegmatitic fluid to infiltrate surrounding rocks, and it often makes often chemical exchanges with them. The long list of gemstones which are formed from igneous rock include the chrysoberyl group, all quartz (including amethyst, citrine and ametrine), beryl (emerald, morganite and aquamarine), garnet, moonstone, apatite, diamond, spinel, tanzanite, tourmaline, topaz and zircon.

Once the igneous rock reaches the surface of the earth, there is a force of erosion and weathering which produces smaller particles, and it accumulates on the surface or is moved by wind and water. As time passes, layers of these sediments build upon land or under water. The pressure from the upper layers results in compaction in the lower layers, along with various chemical and physical changes such as lithification. Gemstones associated with sedimentary rocks are jasper, malachite, opal and zircon.

The presence of intrusive magma in a concerned area (known as contact metamorphism), or of tectonic plate interactions on a larger scale (known as regional metamorphism) brings igneous and sedimentary rock and minerals under heat or pressure and causes changes in their chemistry and crystal structure. The result is the creation of metamorphic rock. Gemstones formed from metamorphic rocks include beryl, jade, lapis lazuli, turquoise, spinel, ruby, sapphire and zircon.

Rocks and minerals are continuous in a state of change, referred to as the rock cycle. Igneous rock changes into sedimentary or metamorphic rock. Sedimentary rock can change into metamorphic or igneous rock.