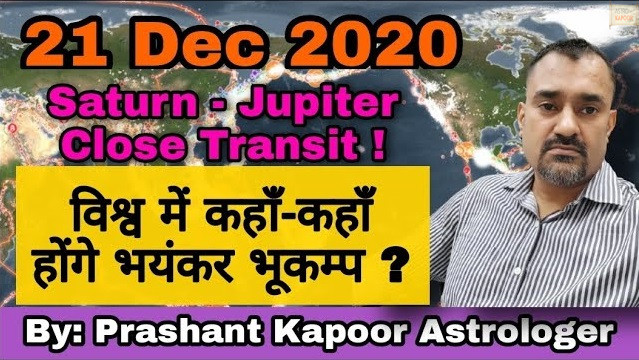 Friends, Vande Mataram. The Kundali available on the screen shows a very close transit happening after 60 years in between Dev Guru Brihaspati and Shani Deva in Makar Rashi in Uttara Ashadha Nakshatra on 21 December 2020 at 23:50 AM with the maximum closeness of 6.20 Degree. This combination signs a major earthquake nationally and internationally.

Through this kundali analysis, we will identify in which areas on the globe could see major storms and the loss of life and property.

Before I continue further with this video, let me tell you that I have created around 10 earthquake prediction videos before and the links for them is present in the video description box date-wise.

This video is going to be research-based so you can understand how these combinations occur. So without going into detail, I will not discuss Sarvatobhadra Chakra which could take 30 minutes to discuss this all, instead, I will tell short fundamentals on how you can analyze such predictions.

For this, let’s take a date of birth, you can make kundali as per 2077 Samvat which is 24th march 2020, Timings 2:28 PM Delhi in which Chandrama was in Pisces under Karka Lagna Kundali and Chandrama was in the Uttara Bhadra Nakshatra which is also Shani’s Nakshatra. Now, what indications you can see in this same combination Chandrama is in 3 Degree Uttara Bhadra nakshatra have moved to Shatru Nakshatra of Shani. Right now I’m just talking about India and will discuss it with the rest of the world later.

Now, when the Chandrama matches with such combinations in Vakri Sign it indicates PAIN for the State which belongs to that watery sign or the states with direction towards the eight houses.

Now let’s see the same through Chandrama with Pisces under Watery Sign Chandrama has moved to eight houses in north direction and if we look at the Pisces is belongs to the North. So there are again 2 combinations on North which indicated a major impact on North Areas with extreme Cold.

Let’s have a quick look at the rest of the combinations. Shukra and Ketu in 4th House are in Pain also creates watery signs and Shukra is a watery planet. So, again North direction is still in Pain under 3rd combination.

Let’s proceed for the 5th house; here you can see the combustion of Sun and Mercury facing towards the east direction, even though Dhanu Rashi. It’s a coincidence that all planets face towards the same direction through which all Nakshatra are coming and Bhavas also giving signs to the same direction.

Through the 6th house, Guru and Shani, these are slow-moving planets and are moving towards creating a major earthquake. Let’s understand the roles of these planets, there was a solar eclipse on 14th December which is a time through which major cyclones, thunderstorms, tornados have started taking place on Dev Guru Brihaspati, and on 21st December this scenario will convert into a major storm.

Shani is a cold planet and major cold storms will also start on that planet mean both will merge indicated a major earthquake.

Let’s move towards Mangal and Chandrama sitting in Pisces in the eight houses with north direction indicating trouble combinations. Rahu is sitting in the Earth Sign and other planets include Jupiter and Saturn.

So these are the planets to consider whenever we need to analyses earthquake predictions. In other words, there will be earthquake chances when Jupiter and Saturn move towards earth sign and if there are Paap Kartari effect or having Mangal’s eye which is not present here but still Sun have moved in the middle of Mars which we can say Partial Paap Kartari and Rahu also holds an eye on Jupiter and Saturn which are the indications towards an earthquake.

Bhrispati and Shukra are in Mitra Nakshatra and Shani is again in Uttara Bhadra Nakshatra of Surya. So here 5 planets are Shatru. We also calculate Rahu and Ketu for earthquake predictions which are 6th Nakshatra.

We will consider Rahu and Ketu as one planet because of their same 180 Degree tilt. So 6 Nakshatras here have become Shatru Kshetri and Uranus in Mesh Rashi Aswni Nakshatra which is Ketu’s Nakshatra.

Now see, Uranus transit in Mesh Rashi which indicates East towards India and the same direction will be counted for the whole world through the center point of the globe. Neptune is in the Kumbha Rashi which is Moving in Bhrispati Nakshatra of Purva Bharva Nakshatra.

Kumbh Rashi means Vayu Sign and in Jupiter heavy storms are already taking place that will be prominent on the 21st of December and Pluto is in Dhanu Rashi (Fire Sign, East Rashi) and Dhanu is in Guru Rashi Uttashada Pratham Charan, the next combination with Pluto says it is also in Pain and again Paining the East Rahi.

Let’s move towards the final results and see where these earthquakes will take place. See Saturn already dealing with Cold Storms and Tornados in Jupiter and if we talk about north areas that have an extreme cold like, Jammu Kashmir, Laddakh, Siachin, etc including Pakistan (POK) areas and all Himalayans are under red zones for earthquake and in East direction which is also prominent.

It’s all not limited to north and east/North-East zones in which major earthquake is predicted but also small earthquakes around the globe are predicted for the next 2 months.

Khagras Solas Eclipse also took place on 14th December on which I launched a video in which I specified areas and did some other predictions for the extreme cold which people have never experienced and you can see from the last 2-3 days there is a sudden cold started and it will increase after 21st of December.

In that video, I mentioned some areas which are all applicable here as well that shows major signs for the earthquakes, Peru, Argentina, Panama, Columbia, Britain, Southern America, Alaska, and all cold areas can face earthquakes which will start from 21st of December 2020 which is a very prominent date.
By: Prashant Kapoor